The Indian startup ecosystem has seen a roller coaster ride in the past few years. From witnessing a funding boom in 2021 and the highest-ever number of unicorns in the same year to a bearish funding environment in 2022, the startup landscape in India has gone through many highs and lows.

Today India is the world’s third-largest startup ecosystem, with more than 84,012 recognized startups as of 30 November 2022. In this 75th year of independence, the number of recognized startups has increased from 452 in 2016 to 75,000. Moreover, the Indian startup ecosystem has so far generated an astonishing 7.46 lakh jobs, a rise of 110% annually over the previous six years, and job creation by startups is expected to grow at a rate of 24% annually in the 2022-27 period.

In this article, I’ll be taking a closer look at the startup ecosystem in India and the trends that have emerged in 2022. I’ll also be offering my insights into what we can expect to see in 2023 and the steps startups should take to succeed in the upcoming year. 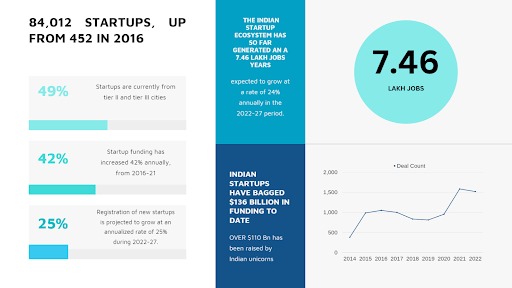 In 2021, Indian startups raised a record-breaking $42 billion in funding. However, in 2022, the funding scenario changed dramatically, with the amount raised falling by 40% to $25 billion.

The number of mega deals (deals above $100 million) also plummeted by 45% in 2022, as investors such as Tiger Global and SoftBank pulled back from their aggressive funding strategies.

However, despite the bearish sentiment, seed and bridge funding saw an increase of 27% and 11% respectively. This could be attributed to investors’ desire to test out different segments with small ticket sizes.

Sectors That Gained Traction in 2022 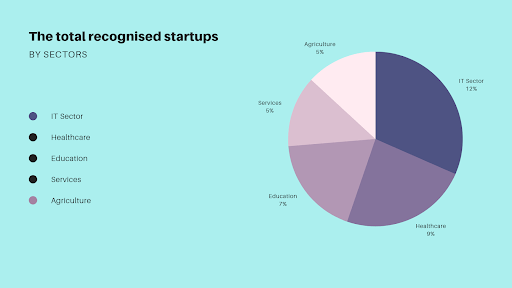 Ecommerce, fintech, and enterprisetech were the top three sectors in terms of funding in 2022.

The ecommerce sector saw the most deals in 2022, with startups raising $4 billion across 310 deals. This could be attributed to the increasing digitization, continuing fear of the Covid-19 pandemic, micro and instant delivery models, and the Direct-To-Consumer (D2C) momentum.

Fintech was the leading sector in terms of the funding amount. Fintech startups raised $4.5 billion across 250 deals.

Enterprisetech was the only sector to see an uptick, with startups raising $4 billion across 303 deals, an increase of 23% from the previous year. This could be attributed to factors such as B2B focus, deeptech integration, the rise in automation, and the listing of Freshworks on the Nasdaq in 2021.

However, the country’s emerging startup hubs saw an impressive 41% increase in funding. These hubs include all parts of the country outside Bengaluru, Delhi NCR, and Mumbai.

However, the share of women-led startups in the coveted unicorn club rose to 33% in 2022, up from 14% in 2021. This could be attributed to the seven women-led startups that turned unicorns in 2022 – 5ire, Amagi, Hasura, Lead, Livspace, Open Bank, and Oxyzo.

The number of startup launches in 2022 was the lowest since 2014, due to the funding winter. This indicates that more mature and experienced founders are now taking the centre stage, while young founders are taking the time to solidify their market research. 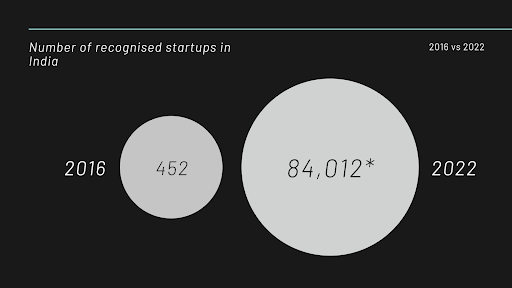 According to a recent survey, 78% of Indian startup founders do not anticipate any slowdown in their FY23 revenues. Three out of five venture capitalists (VCs) in India believe that the conservative investor sentiment towards startups will continue in FY24.

We can expect to see more of the same in 2023 – bearish sentiment, conservative investors, and a focus on proven business models. However, the government’s support for the startup ecosystem and the rise of Web3, SaaS, and deeptech solutions will be major boosters for the sector.

E-commerce funding is likely to decline due to lower consumer spending. The government’s continued focus on digitization and the startup ecosystem is expected to drive the growth of the sector in the coming year.

India’s startup ecosystem is making a big impact on the economy and creating jobs at an impressive rate. With government support and the right initiatives, we can expect the number of recognized startups to continue to grow exponentially. This will ensure greater economic growth and job creation and the nation as a whole.

But on the flip side, the Indian startup ecosystem has taken a beating due to the pandemic and investors have become increasingly cautious. However, the theme of digitization continues to play out and startups involved in it will continue to grow. As we move toward 2023, there are several key trends to watch out for. We can expect investors to remain cautious, and India to remain the third-largest startup ecosystem. The government’s focus on ‘Digital India’ and startups will also be an important factor in the coming year.

How to assemble the perfect founding team for your startup

How to find the ideal co-founder for your startup?